The Guardian invites us to consider this year’s honorary degree recipients:

It’s about this time of year that academics start digging out their robes and dusting off their mortar boards, as thousands of students prepare to receive their degrees at graduation ceremonies across the country. Accompanying them will be a hand-selected elite deemed worthy enough to obtain an honorary degree.

This year’s crop of honorary grads is a diverse group, from True Blood star Alexander Skarsgård, who receives his from Leeds Metropolitan University having studied there for six months before dropping out, Iron Maiden singer Bruce Dickinson who’s picked up an honorary doctorate for his contribution to music from Queen Mary’s University in London and Jarvis Cocker, who picked one up from his Alma Mater Central Saint Martins. Even the bloke behind the meerkat adverts, Darren Walsh, got one from the University of the Creative Arts in Farnham.

As if that weren’t enough there are many others this year:

For many of these celebs, this is their first experience of picking up an honorary. Bus as noted in an earlier post on this topic, some people have more than others. And Desmond Tutu, collecting an honorary degree from the University of Leicester this month, has around 50 of them.

Some other recent(ish) recipients of note: 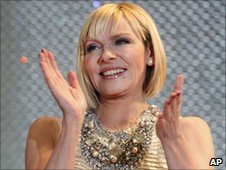 It’s a star-studded collection. Sadly no place for the Chuckle Brothers this year though.

3 thoughts on “Honorary degree anyone?”