Zombies in the Academy: Living Death in Higher Education 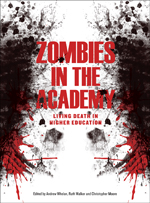 Very excited at the news of the publication of Zombies in the Academy: Living Death in Higher Education. Ever since the launch of the zombie course at the University of Baltimore there has clearly been plenty of room for further undead related higher education activity. This is though a very serious text with serious intent:

Zombies in the Academy taps into the current popular fascination with zombies and brings together scholars from a range of fields, including cultural and communication studies, sociology, film studies, and education, to give a critical account of the political, cultural, and pedagogical state of the university through the metaphor of zombiedom. The contributions to this volume argue that the increasing corporatization of the academy—an environment emphasizing publication, narrow research, and the vulnerability of the tenure system— is creating a crisis in higher education best understood through the language of zombie culture—the undead, contagion, and plague, among others. Zombies in the Academy presents essays from a variety of scholars and creative writers who present an engaging and entertaining appeal for serious recognition of the conditions of contemporary humanities teaching, culture, and labor practices.

Some of the chapter titles give more information about the thrust of the arguments here:

Really looks good and the ideal book for reading on the beach this summer.