Some odd things can happen on campus. Fortunately, our unflappable Security staff are more than capable of responding to any situation:

0210 Report of a Conference Delegate lying on the ground adjacent to Cavendish Hall. Security attended the male was found to be so drunk he could not stand without assistance and was resident in Willoughby Hall. Security Officers took the delegate back to his Hall a further check on him was made later in the night to confirm he was well.

1845 Security spoke to two youths who refused to leave Jubilee Campus. The youths are part of the larger group that has been causing issues on the Campus. The Police were called and on arrival they spoke to the youths and took them home to speak to their parents. Security are to follow up.

2028 Report of two suspicious males sitting on a vehicle adjacent to Newark Hall. Security attended and spoke to the males who were found to be students.

1740 Report of a suspicious male on Beeston Lane. Security attended and spoke to the male who was identified as a Conference Delegate.

1635 Report of a male on the roof of Trent Building. Security attended and spoke to the male who stated he was free running. The male was told to leave and not to go back on the building roof.

2030 Report of a Student with an injury to her hand in Hall. Security attended. The Student had bruised one of her fingers while “fooling around” with a friend.

0100 Report of a dispute between a Pizza delivery driver and a Taxi driver outside Willoughby Hall. Both Drivers stated that they had been sworn at by the other. Both drivers given advice.

1240 Report of an alarm clock sounding in a room in Hugh Stewart Hall. Security attended and turned the alarm off.

0010 Report of a disturbance at the Mooch. Security attended. It was reported that a group of Students had stolen a box of Cider from a Beer festival. Students who organised the festival had recovered the Cider but two of the group had been punched while recovering it. Security to follow up. Police not involved.

1545 The Porter of Willoughby Hall reported that a sofa was on the roof of the Porters Lodge and that Estates would remove tomorrow.

2315 A member of Staff from Starbucks cafe reported that they had left two grills on in the Cafe. Security entered Starbucks and turned the Grills off.

1140 Report of a male by Highfields Lake with a Sword. Security attended. On arrival Officers spoke to a number of Students from a re-enactment Society and informed them of the concerns which had been raised. Students’ Union to be informed of Police request to be notified of any further such meetings in this area.

16:35 Security received a report of a cigarette bin on fire outside the entrance of Humanities. On arrival, the fire had been put out with water by a member of staff. The Helpdesk were already aware. 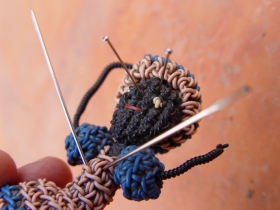 1510 A member of the public contacted Security to report that there was a Voodoo doll on the Headless Statue adjacent to Built Environment. The member of the public was concerned that Satanic Practices may affect Students. The person was given reassurance Officers attended the Statue and removed a doll with a pin through its head.

2245 Report of a dead body on the footpath adjacent to the Swimming Pool. Security and Police attended. On arrival a male was found to be drunk and unconscious. The male was woken up and spoken to. He confirmed his details and stated that he had been to a works party on Campus and had far too much to drink. This was confirmed by his line manager. The male was taken home for his own safety by the Police.