Crimes and misdemeanours at university

I was greatly taken by this list of fineable offences for 18th-century students at Harvard:

Offense #19, “Cutting off the lead,” seems to refer to the lead on the college building’s roof. Lead was once used for roofing material (especially for more expensively-constructed buildings), and such buildings suffered from the depradations of thieves who would steal the lead and sell it. It’s unclear, in this case, whether the students were cutting off lead for profit or for simple mischief.

Students have always behaved badly. Not all of them and not all of the time but universities have often felt the need to seek to constrain the worst excesses and this list from Harvard is typical although clearly very much of its time. (See also True Crime on Campus…)

A previous post here looked at regulations in Oxford and Uzbekistan, in the 16th Century and more recently.

In 1584 at Oxford University, statutes were approved to prevent disorder among the student body. These regulations also contain references to specific degree requirements including attendance at lectures on Aristotle and an instruction not to play football. (Sylvester, D (1970), Educational Documents, 800-1816, London: Methuen pp151-153.)

These days universities around the world tend to have more comprehensive requirements (but perhaps more supportive of sporting activity). See for example the University of Nottingham Code of Discipline for Students.

An interesting development of this has been reported by the Chronicle which noted that Uzbekistan’s Ministry of Higher and Secondary Education issued a ‘code of conduct’ for students, covering such matters as how they should shake hands with professors and the proper time to visit the toilet during classes.

Radio Free Europe/Radio Liberty (quoted by the Chronicle) described the code, “Ethical Rules for Higher Education Institutions,” as an attempt by an authoritarian government to keep its youth population in line:

The ministry is requiring that its pedantic “Ethical Rules for Higher Education Institutions” be signed by every university student and professor in the country.

“These rules are being introduced to form and retain, as well as defend, the ethical integrity of members of higher educational institutions,” the document says. It promises to “prevent the decay of students…and defend them from alcoholism and drug addiction, as well as the threats of religious extremism and mass culture.”

(It’s good to see that someone is still fighting that last battle, particularly after Rutgers University paid Nicole “Snooki” Polizzi of MTV’s “Jersey Shore” $32,000 to lecture its students in March 2011. Snooki got $2,000 more than Toni Morrison, the Nobel Prize-winning author who for $30,000 delivered the keynote address at Rutgers’ commencement ceremony in May 2011.) 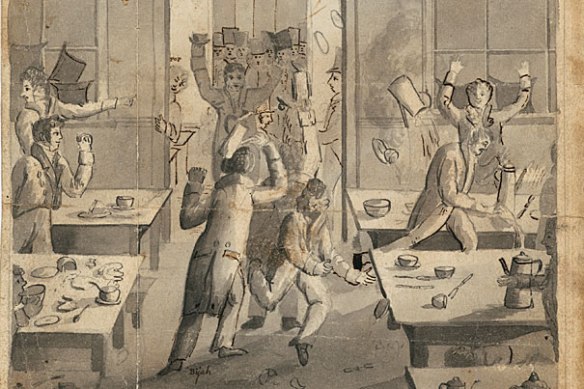 Notwithstanding the lofty language of the prologue, many of the new guidelines read like a rather poor joke, the work of ministry officials with an acutely sardonic sense of humor. Article 3.8 stipulates that “members of a higher education institution, when moving, should take the right side. It is recommended to greet each other in the following way: students first greet professors; men first greet women; younger students first greet older students. Shaking hands is excluded from this rule, since elders should reach out to shake first.”

And as if that weren’t enough:

“It is prohibited to post on the Internet materials that are not in line with national values or related to the internal problems of higher educational institutions,” the rules say, before going on to note that they “categorically ban publishing, saving, or distribution via computers of different materials not related to a higher education institution.”

And just when you thought things could not get any worse: “Don’t walk around a university campus with no reason,” the rulebook advises.

So, it really does feel like a bit of a homage to Harvard. Unfortunately it is the Harvard of over 200 years ago rather than today.