Real or fake universities? The votes are in

Most of the following list of institutions are from the US and the UK but there are a few from other countries too. Five of these are fake but all the other ones are real. Did you manage to identify the five HE fraudsters?

IHere’s your last chance to have a go at the poll:

So the results are below. 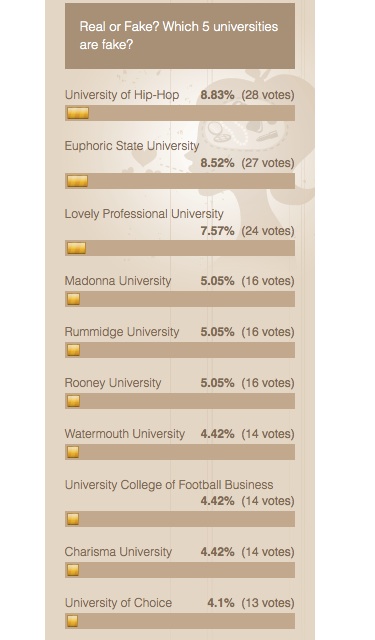 But I guess you will be wanting to know the real from the fake ones then.

There were five definite fakes. And, I’m slightly ashamed to admit, one which has necessitated a stewards’ enquiry.

Four of the definite fakes appear in the top 10.

They are as follows:

And then from near the bottom of the poll, spotted by hardly anyone:

Then we run into a bit of a problem. The improbably named University of Hip-Hop, which topped the poll of likely fakes, does actually exist. However, it is possible that it is not actually a real university either by the common sense definition or by virtue of being likely to earn a place on the HEFCE Register of Higher Education providers. It may even just be a blog and does not actually appear on the highly inclusive UK Register of Learning Providers.

Anyway, here are the staff and students of said institution so it must be real:

This really is the University of Hip Hop

So, apologies for leading anyone up the garden path. But at least we all now know how difficult identifying fake providers is…

2 thoughts on “Real or Fake Universities: the results”