HESA recently released details of HEIs’ capital spend in 2012-13 showing the total spend on buildings and equipment and the sources of the funds used: 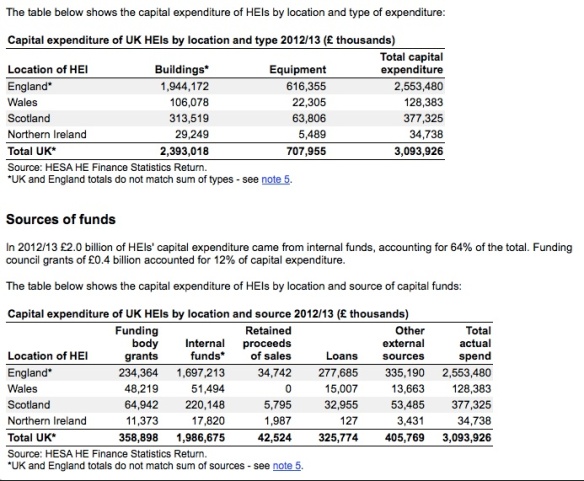 Times Higher Education has a brief piece on this and notes that, unsurprisingly, as external funding for capital expenditure has declined, universities have replaced this from their own funds:

The proportion of capital investment that universities financed using internal funds has leaped 20 per cent over the past four years, according to data released by the Higher Education Statistics Agency 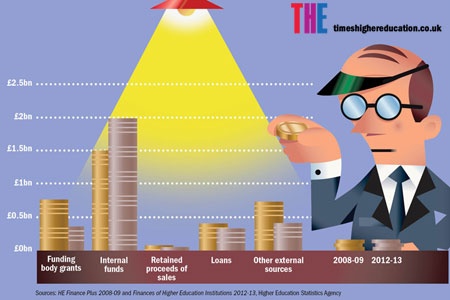 Expenditure funded by loans remained relatively stable, at £408 million in 2008-09 and £326 million in 2012-13, according to the data published earlier this month. Meanwhile, capital projects financed by funding body grants fell by about half over the four years, from £765 million to £359 million.

So, despite the decline in funding agency contributions the total spend on buildings and equipment has increased significantly. Will capital spend continue to grow despite reduced public funding? We can expect so given the greater competition between institutions, the “arms race” of student facilities development and the need to invest ever more to support leading edge research.

A new statement from HEFCE advises universities how to make financial information more visible to students. But is it advice, guidance, assistance or in fact a clear directive?

New guidance aims to help universities and colleges in England present information about income and expenditure on their web-sites in a way that is transparent and accessible to current students and the general public.

The guidance has been developed by the British Universities Finance Directors Group (BUFDG), GuildHE, HEFCE, NUS and Universities UK. It follows a request from the Department of Business, Innovation and Skills to HEFCE for universities and colleges to publish financial information more effectively.

It draws on findings from recent research, including a survey of 2,400 current students which found that there is interest in this type of information but that it was often difficult to find and understand.

The research identifies priorities for improving the presentation of financial information such as accessibility, clear signposting and ensuring technical language is clearly explained, as well as keeping information up to date.

Clear enough for you?

In summary, it seems that all this finance stuff is a bit difficult to find and understand and therefore needs to be provided in accessible and easily digestible form. In other words we need to ensure that this aspect of university management can be represented by infographic. Perhaps it would be better if every dimension of university life were to be represented in pictures?

This just adds, as previously posted, to the excess of information already made available to students. And, if it does turn out to be a requirement rather than just encouragement, then isn’t this yet another piece of unwelcome regulation to add to an already excessive burden?

Note that Hugh Jones has a slightly different take on this, favouring transparency and openness with students. He has a similar line on fancy pictures though…

Or not much of an impact?

It’s a month or so now since the publication of the IPPR report on securing the future of higher education in England.

It was a big report based on a considerable amount of work by a group headed by Nigel Thrift. But, despite an initial flurry, it doesn’t seem to have had much an impact. 23 recommendations covered a number of funding issues but also postgraduate matters, teaching, admissions, regulation, R&D and student visas.

The one recommendation which seems to have gathered more interest than any others (at least in the mainstream press) is the proposal to allow large FE colleges which already have degree awarding powers to apply to use the the title ‘Polytechnic’. According to BBC News the report wanted to ‘bring back polytechnics’ with the title representing a “mark of vocational excellence”:

Nigel Thrift, chairman of the commission and Vice-Chancellor of Warwick University said the revival of polytechnics “would signal that the university title and the university route are not the only form of high status in our system”.

The first 30 polytechnics opened in the 1960s “in an attempt to ensure working-class communities benefited” from the expansion of higher education, say the authors.

But by the early 1990s changes to the labour market meant academic qualifications were seen as the best route to a good job, says the study.

So in 1992 the government turned the polytechnics into ‘new universities’. Now almost half of school leavers go to university. The downside, according to the report, was that a “distinctive role for higher vocational learning was arguably lost”.

The authors say reviving polytechnic status would give vocational learning a much needed boost in an economy which suffers from “significant shortages” of technical skills.

It’s an intriguing and rather striking proposal. But it is not clear that it is really offering anything meaningful in terms of vocational education. Rather it looks like a perpetuation of inflationary designations in higher education following the decision last year to allow very small HEIs to become universities.

On the plus side it is effectively a cost-free recommendation.

But the chances of this or indeed many of the other recommendations in the report having much impact look slight. So it doesn’t exactly have the feel of a Robbins or a Dearing. But perhaps it is a bit too early to tell