Given that I am currently at the University of Nottingham Malaysia Campus on a brief visit I thought I would focus on an international story. ICEF (an international market intelligence outfit) and i-graduate have just published their 2012 global survey of international student recruitment agents’ views on destination countries. The headline figures are probably what you would expectwith the US, Canada, the UK, Australia and New Zealand all showing well. But there are two particularly interesting points in this table and the commentary with it: 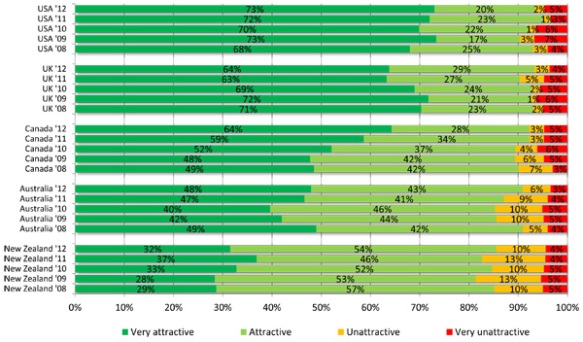 The first is the rise and rise of Canada as a destination. It is really impressive and this perceived attractiveness has, I believe, been confirmed in international student recruitment data. The second is the UK’s decline over the past five years but its stability in the most recent two years when the government’s significantly anti-immigration stance has been most pronounced. The fear must be though that this will get worse in future as the impact of visa restrictions and the reputational fall-out from the London Met debacle bites.

It will be really interesting to see how this plays out in future.