Will everyone have free HE in 10 years’ time? Or is this just more MOOC hype?

An interesting piece in Time on “Why College May Be Totally Free Within 10 Years”. It’s a report of an interesting (but perhaps rather sinister sounding) TedEx style think tank event called the Nantucket Project.

The report commented on presentations by Peter Thiel and Vivek Wadhwa:

Thiel has gotten a lot of attention for his view that higher education is broken, and that many kids would be better off saving their money and going straight from high school into a trade or developing a business. His “20 under 20” fellowship grants high school graduates with a sound business idea $100,000 if they agree to skip college and go right to work on their idea.

Wadhwa’s views are less well known, even though he served as a counter-point interview last May on a 60 Minutes segment featuring Thiel. Wadhwa has unwavering faith in the power of technology to fix much of what is wrong with the world, and he believes that online courses will revolutionize higher education and cut the cost to near zero for most students over the next decade. 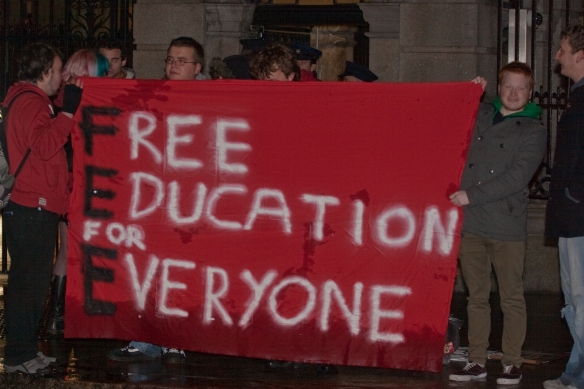 It’s probably not quite what they are campaigning for

Both interesting but really at the hyperbole-driven end of the debate. Then we have the voice of reason from Larry Summers:

Summers, a former president of Harvard, agrees that higher education is in transition. But he thinks Thiel is “badly wrong” about his bubble theory and that Wadhwa is severely underestimating the value of the total university experience. The gap between what college graduates and high school graduates earn is only widening, which speaks to the continuing value of a college degree—no matter what it costs. And, says Summers, “If you think higher education is expensive, try ignorance.”

There is a reason that people pay a lot of money to go to an event like the Super Bowl when it is free on TV, Summers offers. They get more out of it by being present. Something similar is true of an on-campus education, where you may attend extra-curricular events and engage more fully with faculty and other students.

For his part, Wadhwa allows that there will always be students able and willing to pay for a traditional college experience and for them it will be a worthwhile investment. But for the vast majority, from a financial standpoint that kind of education makes no sense and is fast becoming unnecessary. He believes the higher education revolution is coming soon and will happen fast—perhaps fast enough to keep the next generation from finishing school with debts they may never be able to pay.

It’s all breathlessly exciting of course but Summers is right to stress the value of the university experience. As has been noted in previous pieces here on MOOCS – on why they aren’t perhaps as revolutionary as some suggest and some reasons for universities not to panic about them – there is a long way to go before any universities are obliterated by the online wave. And there is a lot more to higher education than content delivery. It’s yet more hype and we’d better get used to it.