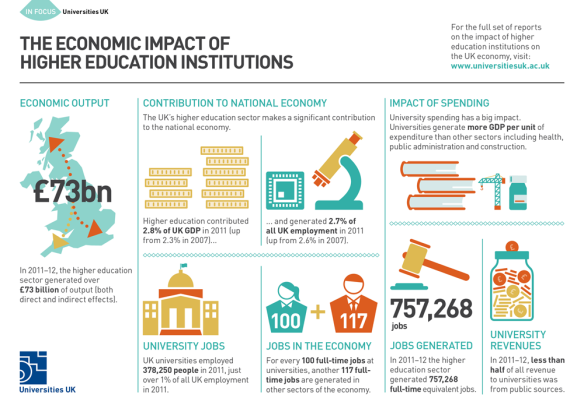 This Universities UK report from earlier in the year on the impact of universities on the UK economy really is a very interesting piece of work which covers the sector’s increasing impact in terms of output, contribution to GDP, job creation, and overseas investment. It also looks at the knock-on effects of expenditure by universities, their staff, and international students. The report finds that in 2011–12, the UK higher education sector:

• generated £10.7 billion of export earnings for the UK

• received less than half its income from public sources

The report also compares HE’s contribution to GDP to that of other sectors:

Higher education’s contribution to GDP (O) is clearly significant. Further analysis was undertaken to assess the impact of universities on GDP compared with a number of other UK sectors. As Figure 11 shows, the higher education institutional contribution to GDP (O) in 2011–12 was comparable to that made by legal activities, greater than that of office administration and less than telecommunications. The industry figures were sourced from the ONS Use Tables for 2010 and hence should not be regarded as a direct like-with-like comparison as the higher education figures are for the year 2011–12. However, Figure 11 is broadly indicative and is helpful in illustrating the relative position of universities in terms of their contribution to GDP. This is an industry-to-industry comparison (ie the secondary GDP generated by the universities or their students is not included).

It’s a really impressive piece of work and reinforces the critical place of higher education in the UK economy. The report is also accompanied by a set of more detailed reports which examine the impact of universities on the economies of the English regions.

Looking specifically at the East Midlands there is an important section reminding us of the huge impact of international students on the local economy:

The current strength of East Midlands higher education institutions in attracting students from further afield to study in the region also means that they are attracting additional money into the region and boosting export earnings.

The summary of the economic output of universities in the East Midlands includes some pretty big numbers:

All very helpful and interesting.